All of the cross stitch on my blog is copyrighted, and the designer is listed next to the pic. Please do not ask me to share charts, as I will not do so under any circumstances. All pics of my work and text, unless otherwise stated, are copyrighted by me and cannot be used in any other written or pictorial form without my written consent. Thank you.

It's been a while

It's been a while since I blogged.  At least a week!  Unusual for me, I know.  It's been busier than usual though.  I've been playing again, and stitching and doing emails and blogs and oh, my Lord how do I keep up with it all!!  I sold a whip to Freak, so I used the proceeds to buy both of my new CS charts.  I was planning on getting the last two Celtic Ladies as well as all the beads and specialty flosses.  But...  It was too expensive.  So I only got the beads and specialty flosses (or most of them.  I still need to get the Rainbow Gallery threads, but 123stitch doesn't carry them.  Apparently, RG won't let them carry their threads because they have no bricks and mortar store.  Stupid!!!).  But now, with the extra money, I bought the two charts, and I'll kit up Lust.  I gave him my mailing addy, and will soon have a money order for them.  Yay!!  I'm so happy about that!       I was gonna go to the Labor Day floss sale at Hancock's Fabrics, but I remembered in time that they don't carry DMC.  They have some sort of off brand.  It feels awful.  At least, I think they do.  I "shopped" online to see if they had regular skeins of DMC and they had cones and balls, but no regular floss.  So I assumed they don't have it.  Sad...  Anyways, I'm off to Hobby Lobby tomorrow to pick up my floss for Lust and my framed Meerkat.  I totally forgot about it last month, until the end of the month and then I was broke.  So that's my agenda for tomorrow.  And some stitching and playing and all the usual things.      I didn't stitch a stitch on Jesus yesterday, so I'll work on him tonight (this morning) after blogging.  I did however, get a lot done on Achoo this weekend.  I dog sat.  I was over there for several hours on Friday (I went at seven thirty PM and stayed till about two the next afternoon) and again on Sunday night and Monday morning.  He was a very good dog except he didn't want to poop for mom or I.  Finally, on Monday morning, I made him stay out till he did.  It took fifteen minutes, but he hadn't gone for over twenty four hours.  For a dog that can easily poop four or five times a day, that's a long time to go without.      On Saturday morning and afternoon, I alternated working on Achoo with reading (Megan's Mark by Lora Leigh) and petting the dog.  It was too funny.  He'd get up, go look out the window, then sidle up to me to get petted for a few minutes.  Then he'd go lay down on his pillow.  Fifteen minutes later, he'd do the same thing, lol.  Needless to say, he got lots of pettings.  I got lots of specialty fibers, lol.  But Achoo looks great.  I'd say more than a quarter is done.  Which I'm very excited about!  I only wanted to get in five hundred stitches, and I went well over that.  At least triple, maybe more.  You can see the pic here: 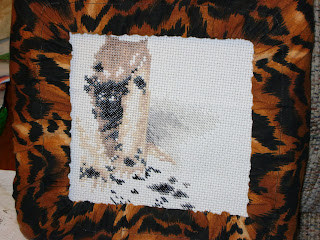 Okay, maybe not.  Multiply refuses to upload my photos tonight.  Maybe blogspot will let me...  (Edit:  Blogspot let me, yay!!  At least one site has a piccy!!)      I managed to lock myself out over the weekend twice.  I'm used to locking the door behind me, but not to a door that will let me out and lock behind me...  Luckily the neighbor has a key!!  So they let us back in both times.  I was so happy someone was home both times, lol.  Lucky me!!  Otherwise, not much has been going on.  At least, not that I can think of.  My computer/Multiply is irritating me, but who knows what that's all about...      It all actually started yesterday.  I was trying to put up photo albums.  I tried to upload the photo for Celtic Spring, and it wouldn't upload.  Finally, I went to 123stitch's site, and saved the pic they had of it.  That one uploaded fine.  So IDK why the uploader won't let me upload anything from my camera anymore.  It's strange...  Stupid computer stuff.  I'm gonna blog on blogspot, then see if I can contact Multiply and see what's going on.  I'm sure I'm not the only one!!!  Wish me luck, y'all!!
Meowed by mdgtjulie at 3:58 AM

I hate it when blogger plays up - it is so annoying! Sounds like you got lots done over the weekend and had fun with the doggie. You are making great progress with Achoo, too.

i also hate it when blogger starts playing up like this..not nice..a big gggrrrr..
sound like you had a lovely busy weekend..lovely progress on your stitching..
keep well dear xx

oooo you were busy and love the dog sitting petting service ..lol and speciality fibres are the best ;) hope you get everything you need at your shopping trip:) love mouse xxxxx

I was missing your posts! :p
Great progress on Achoo, looking good :)
Have a great Tuesday!!! :D

I believe the floss brand Hancocks sells now is Sullivans. It's not as shiny or doesn't feel as soft as DMC, I think. But, I also think it stitches better (doesn't fray as much and is quite easy to get the little twisty knots out). It doesn't convert very well to DMC (maybe because of the lack of shine) and the colors seem a bit dull. I think I'd recommend it for black, though.

Great progress on Achoo~ That's such a cute pattern. :D

Julie, I've been trying to reach you about the Traveling Stash Box you won, but it doesn't seem like my e-mails are getting through to you. Can you please contact me asap? Theresa http://octoberlace.wordpress.com

Hello Julie,
I think it is great how far you have come on Achoo. Glad to see you posting again! We missed you!! Well have a good day and I hope you figure out those computer problems.

Great progress on Achoo! Too bad about the RG threads. Its silly that 123stitch can't carry them. Also its frustrating having to run around looking for DMC threads too! I myself had to do the same thing on Saturday to grab threads for a fall piece I'm making. Hopefully the blogger uploader will work for you and for me when I make a post in a bit. I really don't like the glitches blogger has :(

Great progress on Achoo. :)
Hope blogger is working better for you now.

Sounds as though the neighbor needs to keep that extra key....lol.

Love how Achoo is looking!

Sounds like the dog was happy with your babysitting since he received so much petting! They are funny when you change their routine. We have one that will hold it until it stops raining!

Hehehe, I love Achoo. I think it's one of the cutest designs out there.

Great progress. Nothing like blog issues to annoy a person.

I forget where I got my RG. Hope you can find it without too much trouble.

Wondering if the LNS carries it. I am going this friday--- got to get the JCS halloween book- and pick up a few patterns for an exchange.

Great start to Achoo. I look forward to seeing more of it.

Thanks Kaye. I really enjoyed working on Achoo and taking care of Vin. And it seems that blogger is always acting up in one way or another. Thanks Cucki. It was lovely. Thanks Mouse. I enjoyed the dog petting service too, lol. Thanks Nia. Hope you had a great day yesterday too. It could be Rosey. I just know I didn't like the feel of it. Maybe that's why they have it all on sale. Thanks!! Will do Theresa. And OMG, how exciting, I won!! Thanks Charity, me too!! Me either, Anne. Not much we can do about it though. It's been a pain, looking for who carries what and when I can go and all that. Who knows?!? Thanks Bec. So far, so good. Amen to the that, lol. And thanks Jules. Thanks LissAnne. And oh, geez, that would drive me crazy. At least he'll go in the wet!! Thanks Joysze. I saw it on a blog and fell in love with the design. Fun, Sierra. I don't think they carry them. We're going up, Randi and I, on the fifth. We'll stop by for a bit on the way up to Columbus for some more shopping. Thanks Barb, it'll be a while before I get back to it though. Forty weeks, lol.

Thanks Sally. I really enjoyed it.

This is the list of my WIPs (Works in Progress), SALs (Stitch A Longs), and UFOs (UnFinished Objects).

All of these items are not in the order I work on them in. Rotation pieces are in the order I worked on them last rotation. Each time I work my way through my rotation, I reorder the items in it. I'm also about to start a BUNCH of new things for Maynia.

Yes Dear is not nearly as neglected and abused as she thinks she is, lol. She is spoiled rotten!!! I love her to death, and she has a very happy home. She’ll tell you she’s terribly neglected, but it’s totally not true! You can see her little cuteness here.

I wrote out the HTML for this little blurb myself. It's my first try at writing HTML, and I succeeded on the first try. Whoo hooo me!!!!